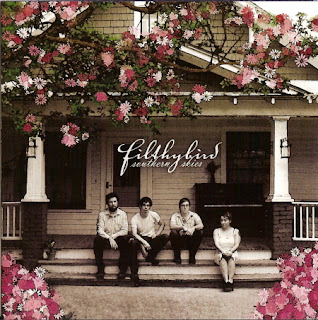 Never heard of Filthybird? Neither had I until a few days ago, even though both Grayson and Grady have given them props. That shows I need to start checking out something on the Web besides TMZ. Filthybird is a Greensboro woman-led quartet, with a new CD out on Durham's Red String Records, which has also released a CD by The Nein, among others.

I put on their latest CD, "Southern Skies" early this morning, and literally can't stop listening to it. Singer/keyboard player Renee Mendoza has a smoky-sweet voice and a passel of emotionally rich lyrics. Check out "The Gospel as Judas Told it to Me":
I was born to sing. It's all I know to do. It takws all I've got to do the things I know I should do. My mother was born to sing, and her mother too, but they lost their voices singing in a world that was cruel.

Mendoza's mother, it turns out, was a member of a Texas garage-rock band called Southern Skies, and the CD includes a song written by her -- "Sing." I didn't even have to look in the CD booklet to recognize former Geezer Lake trumpeter Chris Clodfelter on this song.

Filthybird has been compared to Cat Power, and that's not really a wrong comparison, but personally they remind me of two of my favorite female-led bands, lyrically, vocally and musically: Midnight Movies, because of the husky, breathy vocals and dark psychedelica; and Geraldine Fibbers for the lyrical trippiness and vocal androgyny. Seriously, I wasn't sure until looking at the credits if it was a man or woman singing.

Musically, it's a little jangly, a little swampy, a little psychedelic. Effects-laden and a little trippy. Good stuff, but the vocals are what makes it shine. "Fightsong" is the best song, though "Warm Womb", "Sing" and "Sunshine" give it a run for its money.
Karen A. Mann at 6:29 PM